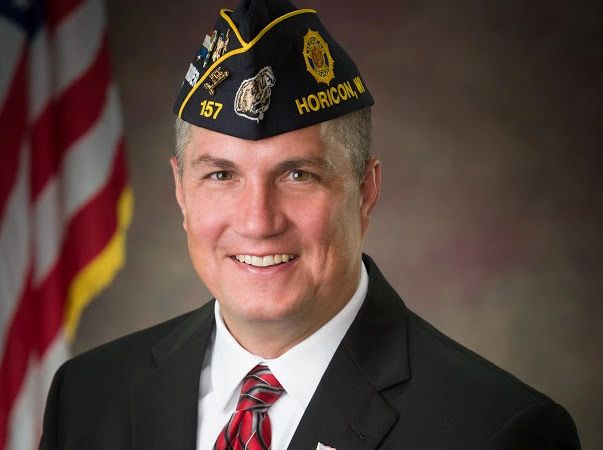 Dan earned his eligibility for membership in The American Legion with service in the United States Navy during the Bosnia/Herzegovina War era as a Commissioned Officer; enrolling in the Navy Chaplaincy program.

His service time in the Navy enabled him to spend time not only with Navy personnel (San Diego, CA, Newport, RI, Everett, WA, USS Paul F. Foster), but also with the Marine Corps (Camp Pendleton, CA).  He will always cherish the time spent in uniform.  He has been a member of The American Legion since 1997.

Dan was born and raised in Merrill, Wisconsin.  In high school, he was the class treasurer and a member of the Marching Jays and Jazz Band.  Dan was also involved in sports, already lettering in Cross-Country as a Sophomore.  Dan's real prize, however, came when he crossed the finish line of his 7th grade dream of becoming a pastor.

After high school, Dan attended Concordia University in Mequon, WI, and received a Bachelor of Arts degree.  As part of Concordia's global education program, he had the opportunity to travel and visit the Holy Land.  Dan continued his education by earning a Master of Divinity from Concordia Theological Seminary in Fort Wayne, IN.  He also studied in Tallinn, Estonia.  His two years of field work were at St. Peter Lutheran Church in Decatur, IN and he served his vicarage year at St. John Lutheran Church in Plymouth, WI.

In August of 1997, he came to Horicon, WI, and was installed as the Assistant Pastor of St. Stephen Lutheran Church.  October 2000, he accepted the position of Administrative Pastor at St. Stephen, where he is currently serving.

As God has a way of opening and closing doors, so it was with "Lieutenant Dan's" military uniform.  His service to God and Country would never be placed in storage, however, Dan continued to serve our veterans and their families by holding numerous positions within the American Legion over his 25 continuous years of membership.

Dan is married to his wife Stacey.  He has two children, a son (Jacob) and a daughter (Emma).  Stacey and Emma are members of Unit 157, Horicon and Jacob is a member of Squadron 157, Horicon.

Show Your Support for Dan!

If you would like to donate to support Dan in his travels to become National Commander in 2023, please click the button below.

Your support for him and his campaign is appreciated!

You can also pay by check!  Make checks payable to Daniel J. Seehafer for National Commander and send it to:

Thank you for supporting my campaign!